1 My four steeds advanced without stopping;

The way from Ohow was winding and tedious.

But the king's business was not to be slackly performed;

And my heart was wounded with sadness.

ment, the host signifying by his gifts his appreciation of his guests. The 之 in L 7 is merely expletive. 周行--大道, or 至道, 'the great,' or 'the perfect way,' the path of right and wisdom.

Ode 2. Narrative and allusive. A Festal ode complimentary to an officer on his return from an expedition, celebration the union in him of loyal duty and fillial feeling. There is certainly nothing in the ode itself to suggest its being composed for a festal occasion, and to compliment the officer who narrates his story in it. Both Maou and Choo, however, agree in the above account of it. It was not written, they say, by the officer himself, but was put into his month, as it were, to express the sympathy of his royal entertainer with him, and appreciation of his devotion to duty, lliere appear strikingly in it the union of family affections and loyal duty, which we met with in several of the pieces in Part I.; and the merit of king Wftn, to whose times it is assigned, shines out in the allowance which he makes for those affections.

Stt. 1,2. 騑騑 is defined as 'the app. of advancing without ever stopping.' Choo takes 周道 as 大路, 'the great way;' Maou, as I have done in the translation. Acc. to this view, the ode must belong to the time when King Wen was still endeavouring to unite the States in allegiance to the last King of Shang, in whose service the expedition referred to must have been undertaken. Williams says that 倭遲 means 'returning from a distance;' but 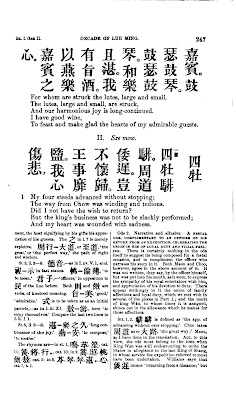 2 My four steeds advanced without stopping;

They panted and snorted, the white steeds black-maned.

And I had not leisure to kneel or to sit.

3 The Filial doves keep flying about,

Collecting on the bushy oaks;

And I had not leisure to nourish my father.

4 The Filial doves keep flying about.

Collecting on the bushy medlars.

And I had not leisure to nourish my mother.

that is not the meaning. 倭 here -- 'winding,' 'tortuous.' The dict, in voc., says that 倭遲, 逶迤, 𨖿[⿺辶爲]迆, 委蛇, 威遲, and 委移 are all synonymous. I have followed Maou in the translation of tan-tan. Choo takes the cliaracters as meaning 'numerous.' 駱 is the name for a white horse with a black mane. The conflict of affection and duty appears in 11. 3, 4. L. 4. --see on I. z. VII. 1. 啟=跪, 'to kneel ;' 處=居 or 坐, 'to sit.' Anciently, there were no such things as chairs. People sat on mats: -- if before a superior, kneeling, on their knees, with the body straight; if at their ease, they sat on the ground, leaning on a bench or stool. The two characters in combination signify -- 'to rest.'

Stt. 8. 4. Medhurst calls the chuy, 'a turtle dove,' but it is a different bird from the 鳴鳩, and smaller. Yeu Ts'an enumerates 14 different names by which it is called; but by none of them can I exactly identify it. It is said to be remarkable for its fillial affection; and I have called it therefore 'the Fillial dove.' This idea seems to be the basis of the allusion from it to the speaker in these two stanzas. pien pien denote 'the app. of flying.' 飛 must = 飛上, 'flying aloft.' 栩, -as in I. x. VIII. 1. 杞 here is difft. from the willow tree of the same name in I. vii. 1. The fines of the sort are said to be in Kan-suh, and Shen-se. Its young leaves, like those of a pomegranate tree, but softer and thinner, are edible. It grows in a bushy manner to the height of 8 and 5 cubits, puts forth purplish flowers in the 6th or 7th month, and produces a red fruit, longish like a date. One of its names is 'goats' teats,' from the shape of the fruit. 將=養 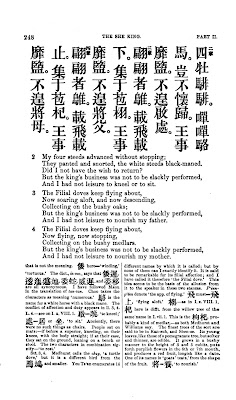 i I yoked my four white steeds, black-man ed; They hurried away with speed. [But] did I not wish to return? Therefore I make this song, Announcing my wish to nourish my mother.

七月 08, 2009
“相由心生”如何翻译？ 再J. M. Barrie的Little Minister中有这么一段对话： "Was she as bonny as folk say?" asked Margaret. "Jean says they speak of her beauty as unearthly." Beauty of her kind," Gavin explained, learnedly, "is neither earthly nor heavenly." He was seeing things as they are very clearly now. "Wat," he said, "is mere physical beauty? Pooh!" "And yet," said Margaret,"the soul surely does speak through the face to some extent." 这句直译，在某种程度上灵魂确实能从面向上表现出来。或者人面知心。 有人将下面这一句翻译为面由心生： The face is the index of the mind. http://zhidao.baidu.com/question/542078.html?fr=qrl 但是，不管怎么样，面相是相对稳定的一种面部形状或气色，较长期内心灵的作用而形成。但是，mind只是短时的想法或者念头，soul是一个人的灵魂，具有永久性。
发表评论
阅读全文